Much of the work on 2874 lately has been behind the scenes, in setting up the charitable trust that will take ownership of the loco and raise funds towards its restoration.  Membership of the trust is now open.  The details of how to join are shown here, please print off the following pages as appropriate and send them along with any remittance to:

Should you have any queries, the treasurer can be contacted via email at the address treasurer at 2874trust.org  substituting the @ symbol for the word at.

Alternatively, a pdf version of the form can be downloaded from this link.

And finally, just to show that not all of the work taking place has been behind the scenes, 2874's cab was removed recently, which paves the way towards lifting the boiler from the frames.  The boiler will need a bit of careful jacking up at each end to free off over half a century's worth of rust that will be binding it in place, and then it can be lifted.  This will almost certainly take place at the same time as the boiler lift of 3850 which is now stopped for a heavy overhaul.

Posted by Anonymous at Monday, November 23, 2015 No comments:

A Change of Scenery

It's been a little while since the last update on these pages, but a few things have happened worthy of note.

To start with, in February, a few original fittings from 2874 were acquired.  Len successfully bid on 2874's smoke box number plate which came up for auction and your humble scribe swapped a cabside number plate from 2876 for one from 2874.   A photo of the plates reattached to the loco even made it into Steam Railway magazine.

During the recent "Speed to the West" steam gala taking place on the Gloucestershire Warwickshire Railway,  Bulleid pacific, 35006, Peninsular & Oriental S.N. Co's usual spot on display in the car park was up for grabs as 35006 was shunted down to Winchcombe for display in the bay platform.  I arranged for 2874 to be shunted into the car park and for the plates to be temporarily reattached.  The DMLL group had a stall in the nearby trade stands marquee and having one of our locos (Dinmore Manor) in steam running up and down the line, as well as having 2874 just outside the marquee caused a fair amount of interest in the group.
Once the gala had finished, she returned to her usual spot in the yard on road 4 and further work has taken place on extracting boiler tubes:
Steve has managed to cut out enough of the smoke box tubeplate (wasted beyond reuse) to gain access to the inside of the boiler.
Finally, a reminder of how she once was and how she will be again.  The same auction that provided the smoke box number plate also turned up this photo of 2874 in Shrewsbury
The early BR 'cycling lion' logo indicates that this shot was taken no earlier than 1950.  I haven't seen any photos of 2874 with the later (1956 and onwards) 'ferret & dartboard' logo, so it isn't impossible that she stayed like this until withdrawal on 31st May 1963.
Posted by Anonymous at Wednesday, June 10, 2015 No comments:

The 28XX class of locomotives were designed by George Jackson Churchward of the Great Western Railway company for heavy freight work.  The prototype originally numbered 97, but later renumbered as 2800 first steamed in 1903.  In 1905, production commenced continuing until 1919. The class remained at work until the last one, 2876 was withdrawn on 31/01/65, so the class as a whole had a service life in excess of sixty years. The 28XX class was the first UK design of 2-8-0 locomotive.

The principle work of the 28XX class was long haul heavy freight trains.  The sealing of the internal steam pipes was one of the few problems encountered with the class and commencing in 1934, most of them had external replacements.  2874 was among the few that retained internal steam pipes and is the only one of those in preservation likely to steam again.  The only other possible contenders are 2861 which survived at Barry Island scrap yard only to be cannibalised for parts to use on Didcot's Night Owl project, 2818 which is part of the National Railway Museum's collection and unlikely to be restored to steam and 2873 which survives in a sort of limbo, the chassis owned by the South Devon Railway and the boiler owned by Tyseley.

From 1909, all 28XX locos were fitted with superheaters and ones built before that retrofitted. When in 1938, Collett embarked on building the 2884 class of heavy freight locomotives, his design differed from Churchward's in few material ways, the most obvious being the use of external steam pipes from the start and a side window to the cab which bears testimony to how essentially correct Churchward's original design had been.

2874 was built in Swindon to Churchward’s design and was part of a batch of 28 to Lot 210, Diagram I and had Works Orders of 2762 - 2789 respectively. Work started in 1918 and was completed at the end of November. The recorded cost to build was £4992 and when the tender was included £6193. It was rated 8F with a tractive effort of 35,380 lbs weighed out at 92 tons 12cwt with its tender.  The tenders used by these locomotives were almost exclusively the Churchward 3500 gallon models.

Coming into traffic on 4th December 1918 it was just too late to help with the major war effort where its class colleagues provided valuable assistance to the Royal Navy in hauling coal from the Welsh coalfields to numerous ports in the Western region and up into Lancashire for onward movement to Scapa Flow – the so-called “Jellicoe Specials”. The first shed was Old Oak Common where it worked turn and turn about on the coal trains from Wales to London - later homes included Reading, Leamington, Tyseley, Neath, Cardiff, Banbury (1947), Stourbridge Newport , Aberdare and its final one again at Neath. There is a lovely photo on the Warwickshire Railways website of her standing at Tyseley on Sunday 21st June 1931. Note that the photo on that link, the "Great Western" logo on the tender has faded to the point of being barely discernable.  There is a fine rake of clerestory coaches in the background too.  The loco was condemned on 24th May 1963 and sold to Woodham Bros on 9th October that year after a working life of 44 years.
The above photo features the early BR 'Cycling Lion' crest on the tender implying a date of 1950 or later.

As with so many other steam locomotives fortunate enough to be sent to Barry Island Scrap Yard, 2874 wasn't cut up straight away, as the scrap yard's owner Dai Woodham preferred to cut up the many wagons that he had as they were quicker and easier to dispose of, leaving the locos until later.
For many of those locos of course that gave preservationists a chance to act to save them and finally after 24 years, 2874 left Barry Island Scrap Yard in August 1987 becoming the 191st loco to be saved from there.  As part of the Terry Rippingdale collection of locos, 2874 waited its turn for overhaul at the Pontypool & Blaenavon Railway for a further 21 years before being sold on to the West Somerset Railway (WSR) in April 2008.
The original intention had been for the WSR to restore 2874 however it was ultimately sold to DMLL and eventually moved to the GWSR at Toddington. The Churchward 3500 gallon tender remains on the West Somerset Railway, DMLL having only purchased the locomotive itself.
As for the future, well here is how she might look when finished:
We would welcome any photos of 2874 in traffic to include on this page and would be delighted if you could forward them to us along with the permission of the copyright holder to use them here.
Posted by Anonymous at Monday, March 02, 2015 No comments:

At the Dinmore Manor Locomotive LTD (DMLL) AGM on 11th October, the shareholders agreed the proposal to support the formation of a charitable trust to take ownership of 2874. The 2874 Trust will be seeking charitable status in order to benefit from the opportunities that are available to Charities but not to limited companies such as DMLL.

The move is aimed to improve access to funding to restore the loco which is presently in ”ex Barry” condition. The project is seen as important since restoration would make it the only engine of it class with the original design feature of internal steam pipes actually in operation.

The restoration will be undertaken by DMLL at the Gloucestershire Warwickshire Steam Railway’s (GWSR) Toddington works using both DMLL and GWSR volunteers. Following restoration Dinmore Manor Locomotive Ltd will operate the loco on behalf of the Trust.

Dinmore Manor Locomotive Ltd Chairman, Kenneth Sims said “This is an ideal arrangement for us. It will fund 2874's restoration whilst leaving the DMLL organisation free to concentrate its resources on our present locomotive fleet of our flagship loco BR(W) No 7820 Dinmore Manor and GWR Heavy Freight No 3850. Dinmore Manor has only returned to steam in 2014 after a heavy overhaul and 3850 will come due for overhaul in 2015”

The 2874 Trust will be chaired by former GWSR Chairman, Malcolm Temple who said “I am delighted to be asked back by steam enthusiasts to tackle another major challenge. It’s a tremendous project”.

There will be the opportunity for steam enthusiasts, including all our shareholders, to become a member of the Trust and help achieve its aim. See the web site www.2874trust.org

The Trust also seeks recruits to help with management and fund raising. Contact David Foster at dh.foster@btinternet.com or on 01643 706943.
Active work has already started on 2874's restoration. The work will of course be something of a background task whilst keeping our flagship loco, 7820 Dinmore Manor running and the heavy overhaul that 3850 will require next year at the end of her 10 year boiler ticket however small steps have already been taken. The cab fittings have been largely removed, leaving the cab ready for lifting off and the rivets securing the boiler have been removed in anticipation of lifting the boiler off of the frames.

There was very little in the cab by way of fittings, the pole reverser being the main item along with some of the sanding gear controls.  Removing those was the primary tasks that needed completing before the cab can be lifted:
Meanwhile, Steve Rob has been hard at work removing the rivets holding the boiler in place, both at the smoke box end and the firebox.  Assuming that the rust isn't binding the boiler to the frames so much as to prevent a crane lifting the boiler out, the boiler is pretty much ready to become air borne.
Steve has also done a sterling job in extricating the superheater header and a number of the flue tubes from the boiler:
And finally, a recent photo of 2874 admiring the setting sun.  The future for this wonderful loco has become a bit brighter.

Posted by Anonymous at Wednesday, December 03, 2014 No comments:

On Wednesday 15th January 2014 the first step in the restoration of GW 2-8-0 Number 2874 was taken when the loco moved from our storage area to the Gloucestershire Warwickshire Railway site at Toddington. 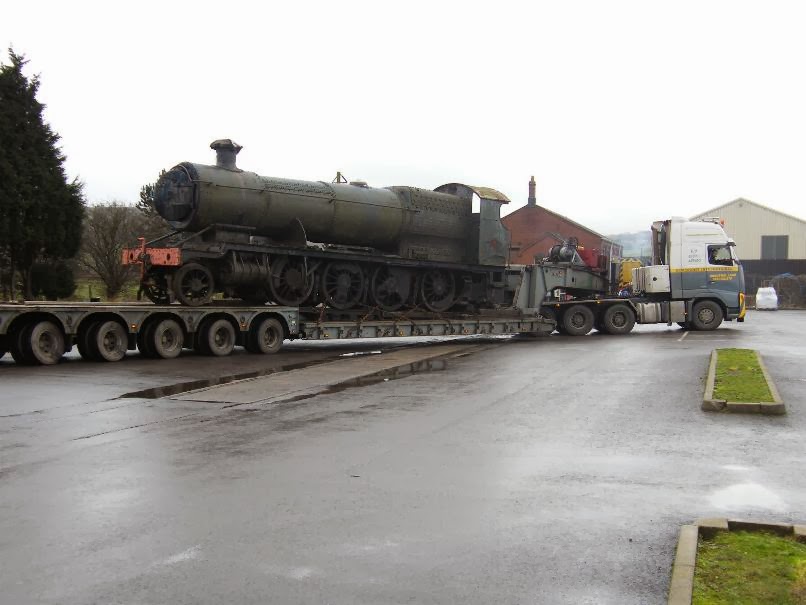 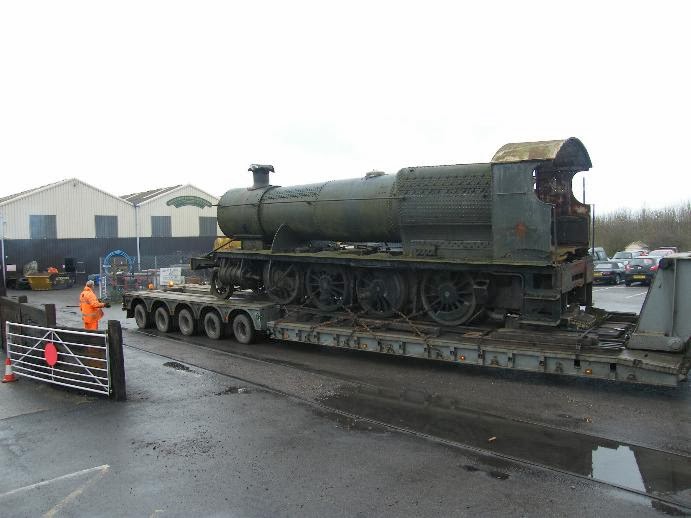 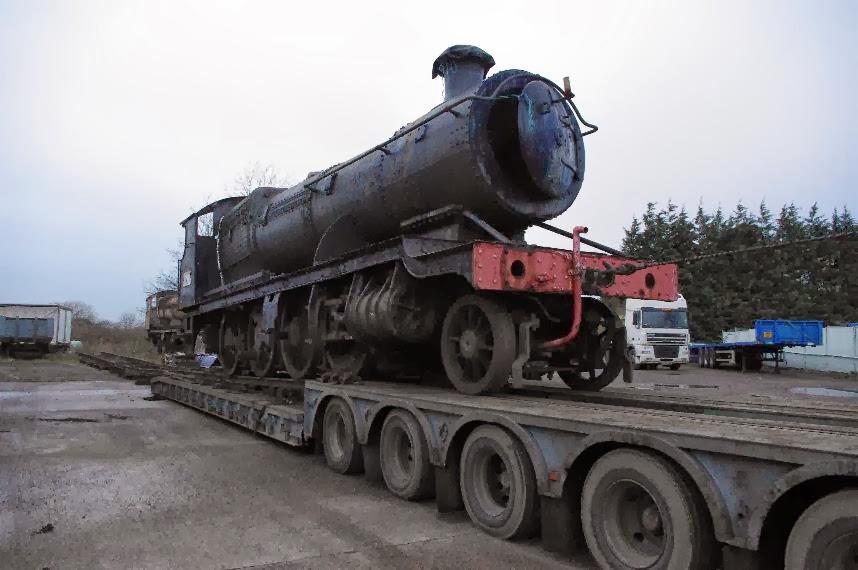 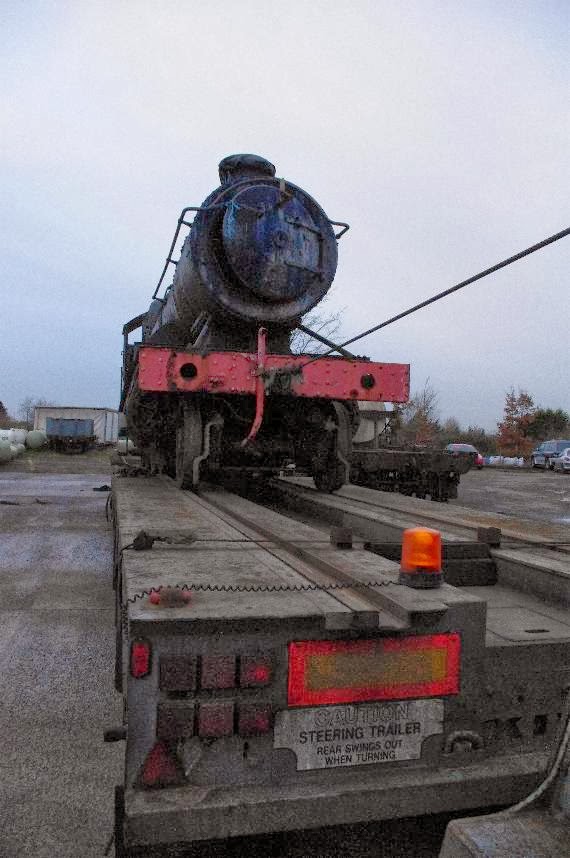 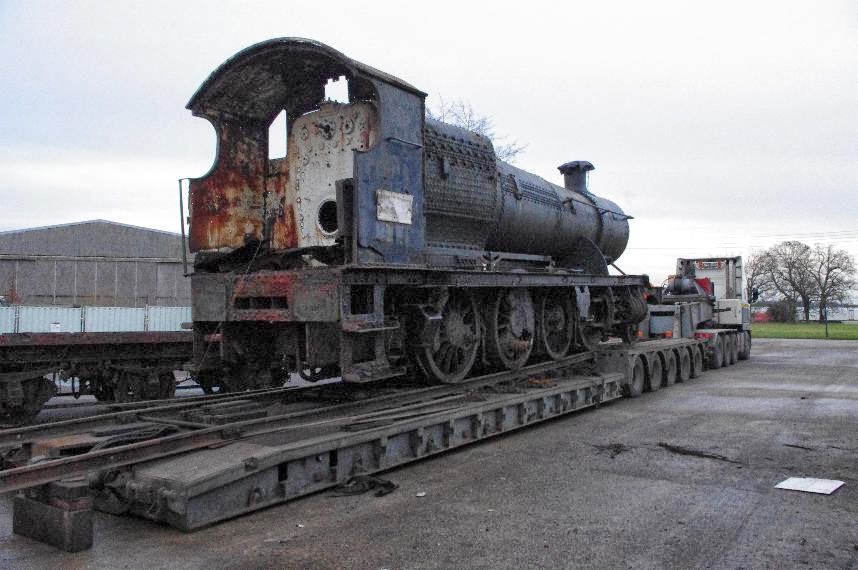 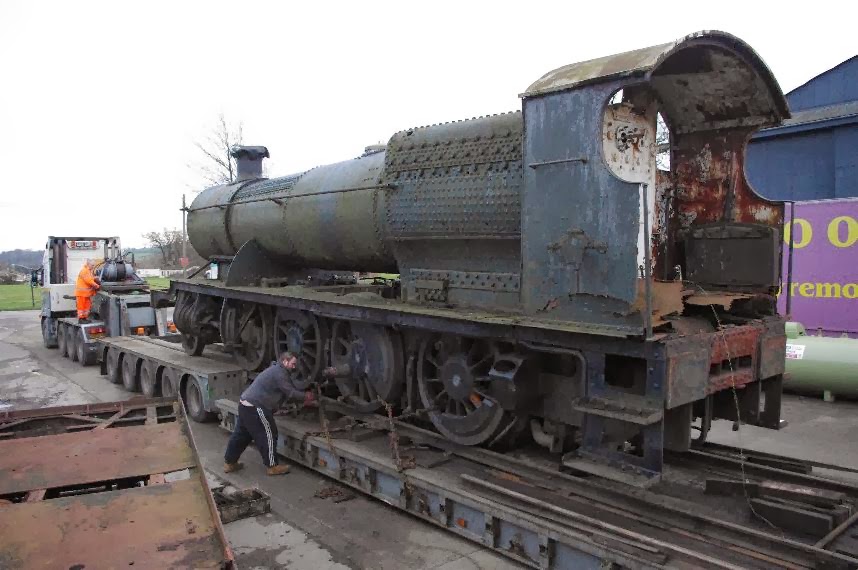 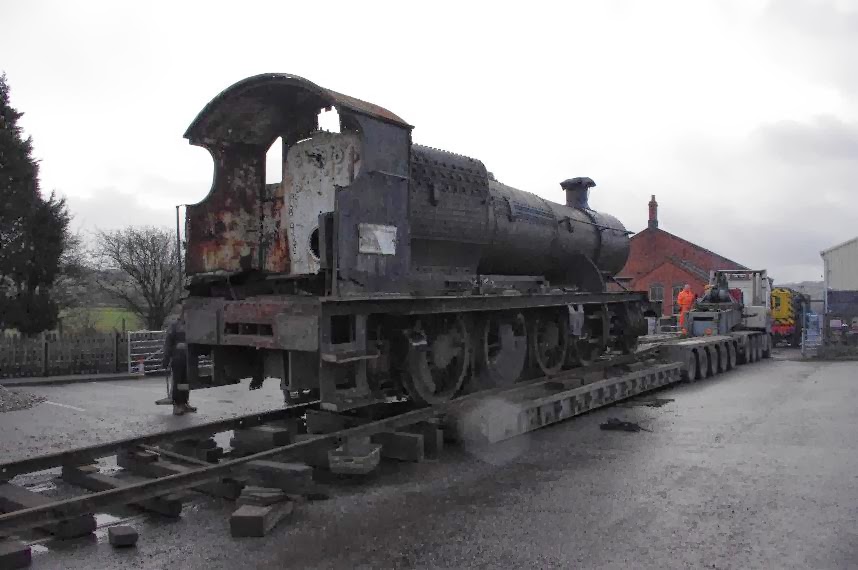 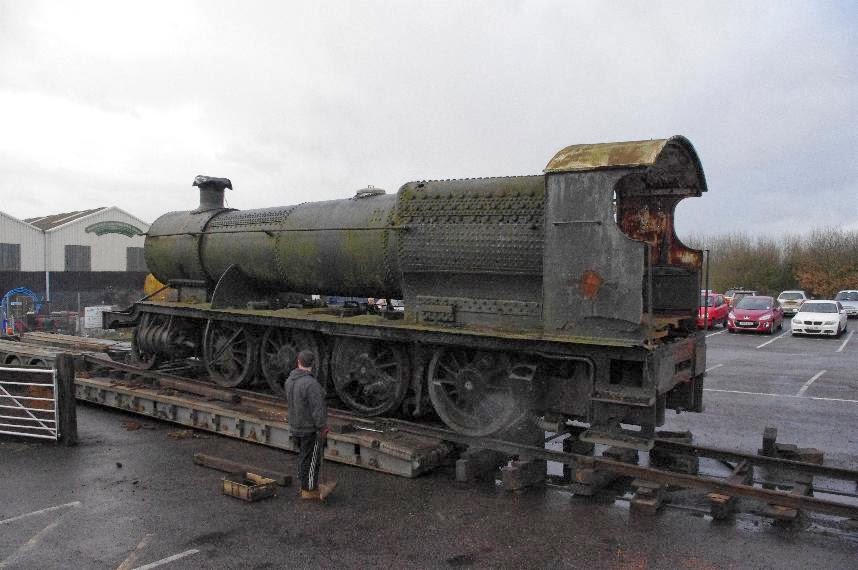 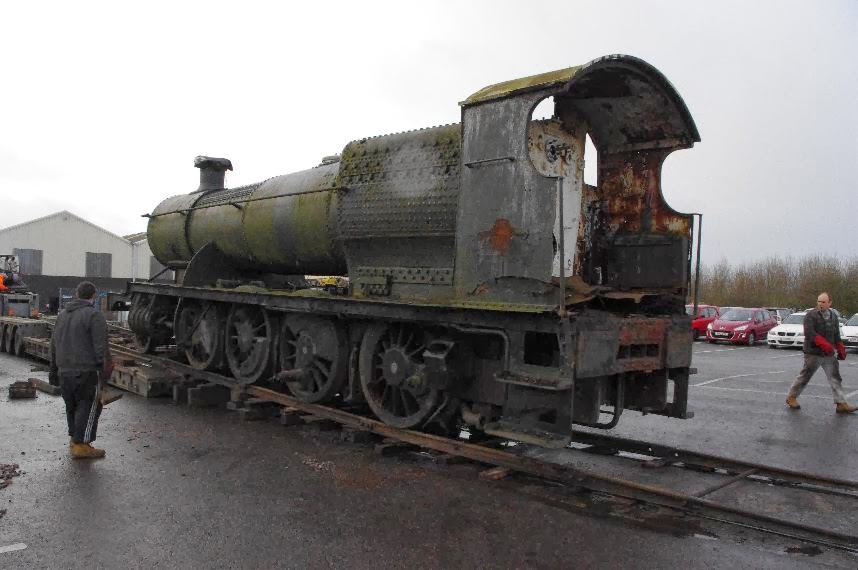 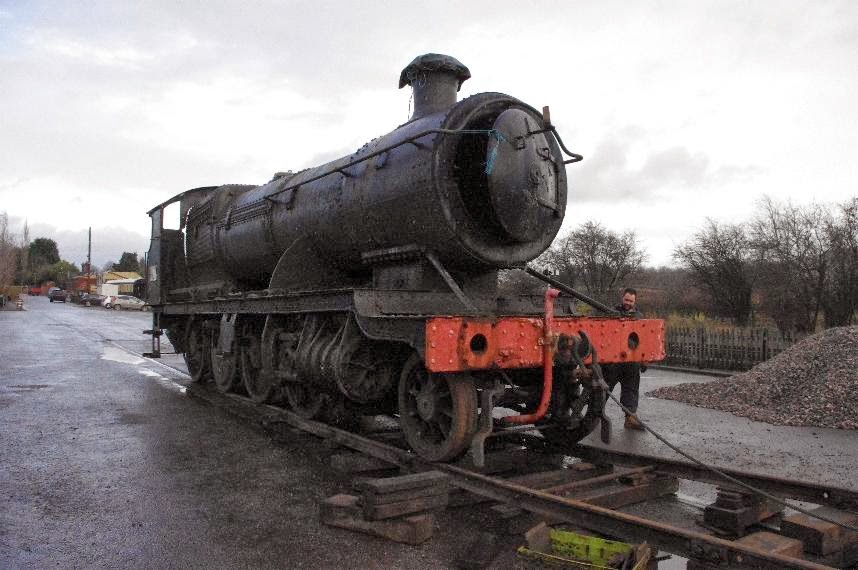 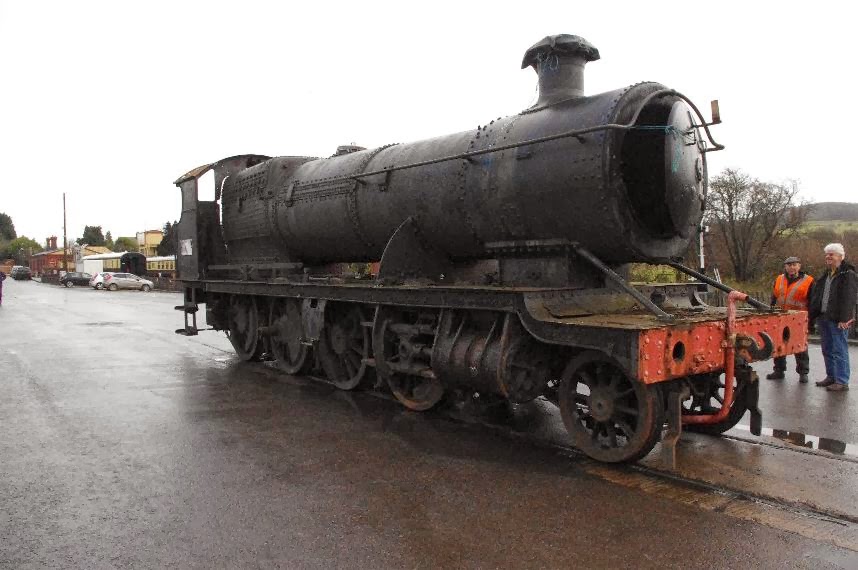 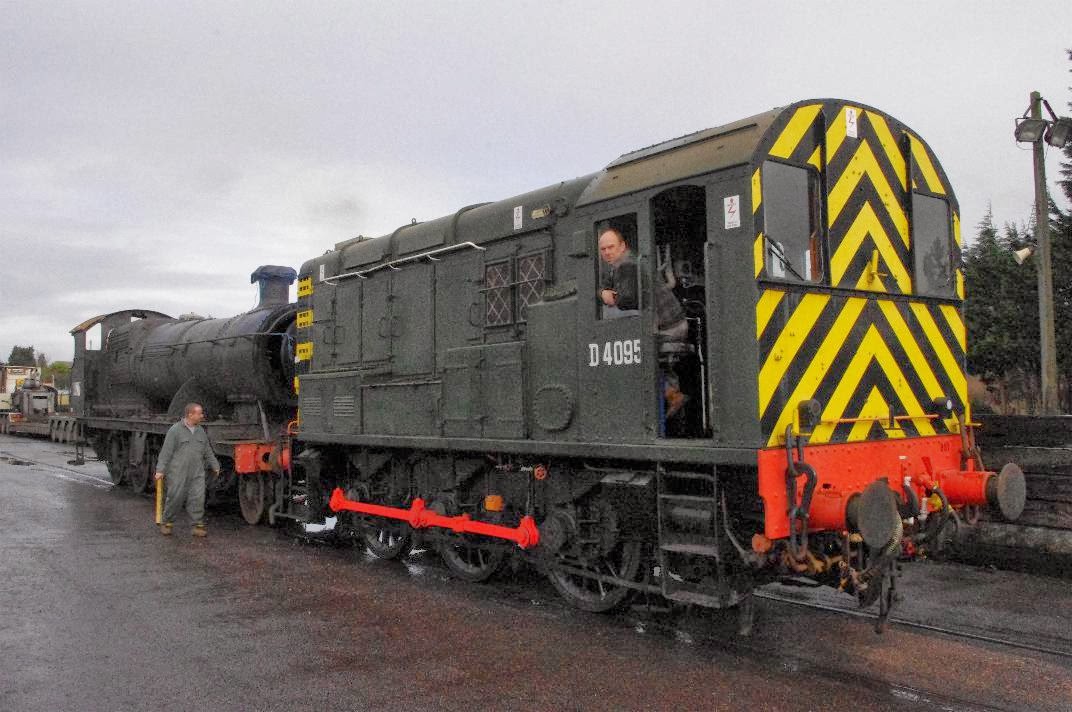 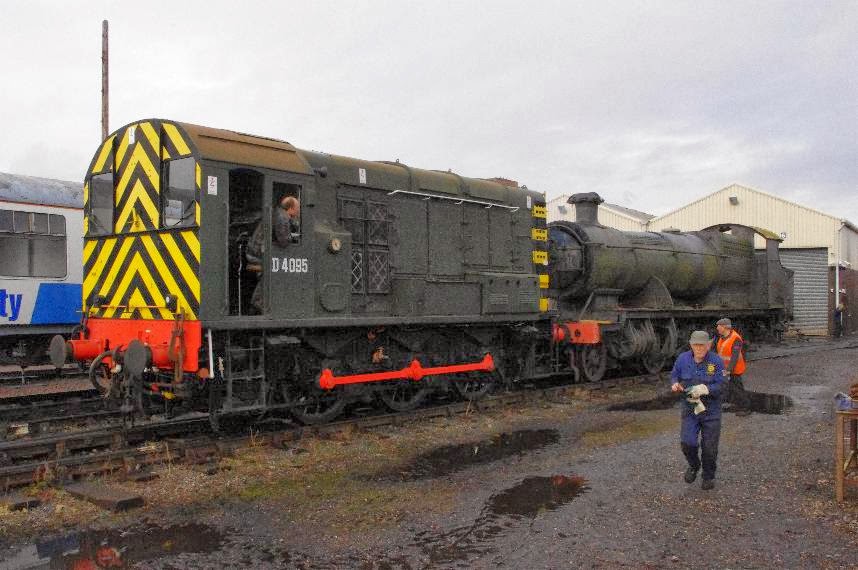 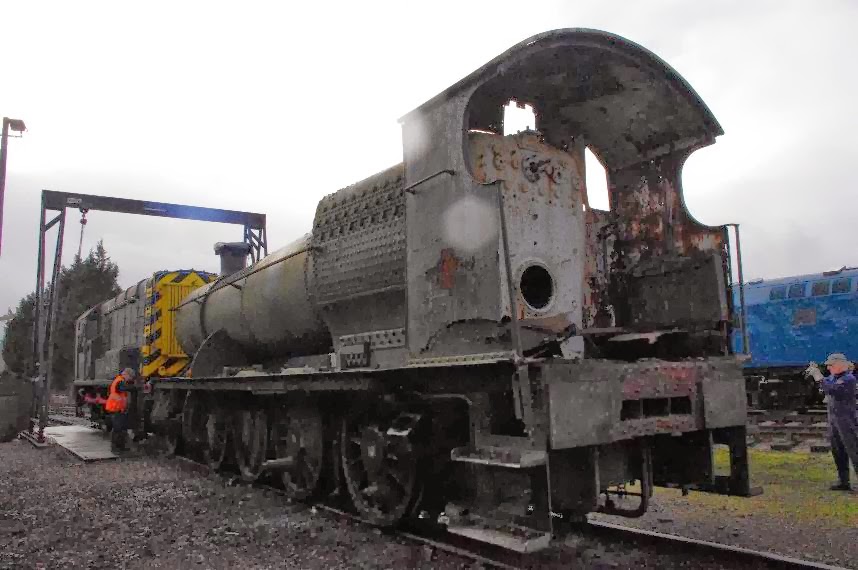 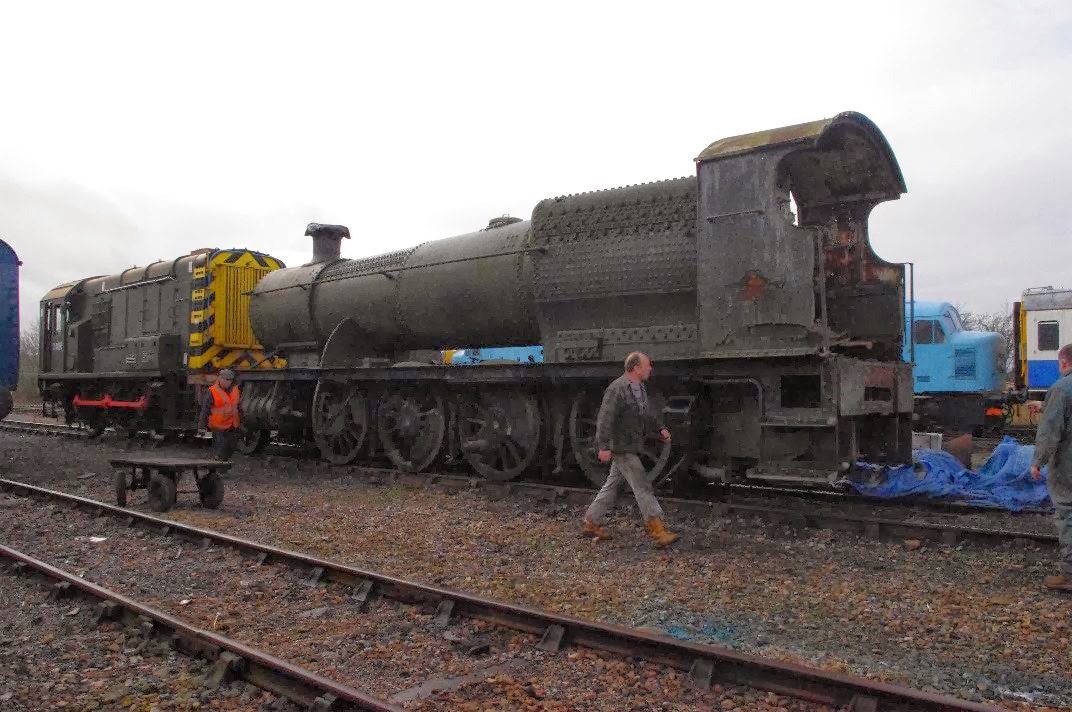